One whirlwind trip from Seattle to New York and The Human Face of Big Data has made it’s official debut into the world.  Well, it’s been making it’s way into the world for a while, but we now consider it officially premiered.  Woohoo!

I got to go to New York for three days for the event (my first time ever into the city – I know, hard to believe) and actually, I ended up with about two days to try see something of the city.  Even with battling traffic into Manhattan and out again and everything that I need to get done for work, I got to squeeze in a few things.

2.  Wonder through a few neighborhoods: 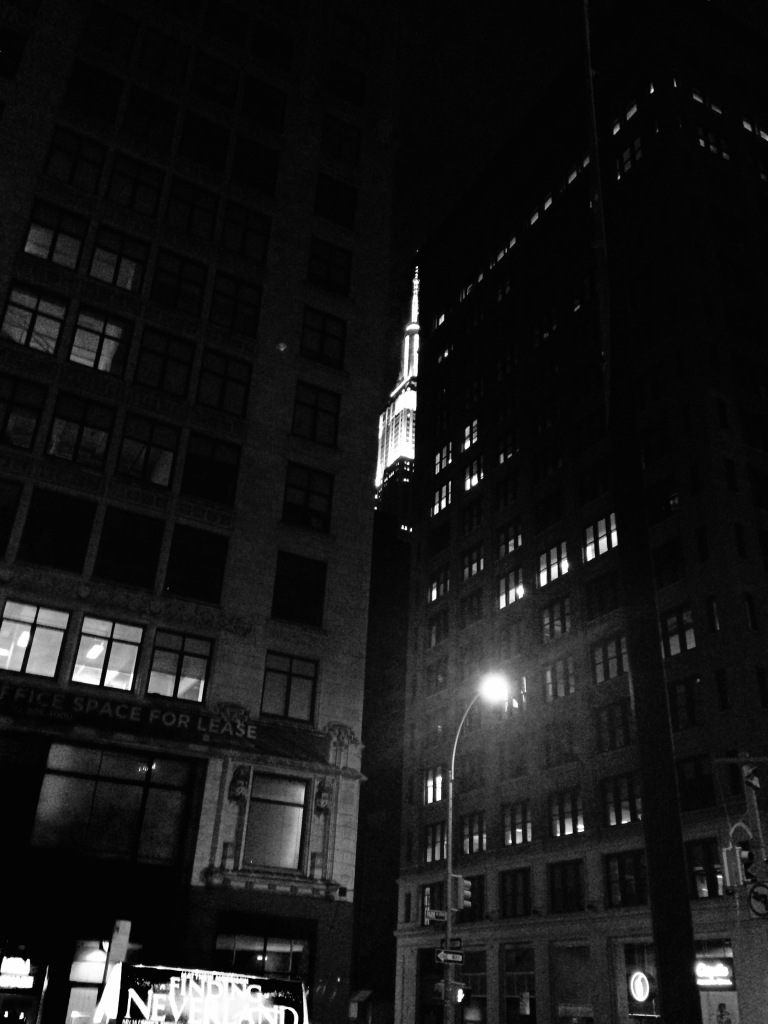 And sort of see the Empire State Building – it’s pretty spectacular at night.

Just one of the delicious menus I got to sample – mussels and frites at Un, Deux, Trois.

The official poster blown up to a 7-foot display.

5. Finally see members of the crew that I haven’t seen in a couple of years and meet a few others in person that I’ve talked to on the phone for hours but never actually seen.

And now I’m back home and researching for a new project.  We’ve got all sorts of things in the works but  I can’t share what they are yet.  Hopefully, in the near future I can make a few exciting announcements.  Until next time, back to work.

More screenings of the film coming to cities across the U.S. as well as broadcasts of the film in over 35 countries in the next year.  I will announce as we get schedules finalized.  A full list can always be found at www.humanfaceofbigdatafilm.com.

I realize that I’ve been M.I.A. the last few weeks and I do have a good reason for that – have been insanely busy getting ready for the New York Premiere of The Human Face of Big Data!  I’m excited for several reasons, but mostly because this will be my first big film premiere – not to mention this is my first time visiting New York.  I probably won’t have much time to see much as my calendar is already filling up with meetings and appointments in my short visit but I’m happy with the idea of wondering through Manhattan for a few hours.

When I saw this short video, it made me happy for several reasons:

It’s amazing how quickly drones have taken over ariel filming in the last year or so.  I’ve actually worked on a couple of projects that used a drone of sorts to get the higher elevation shots that a crane couldn’t reach.  They are so versatile and the camera movement is a dream.  I’m not crazy about the number of drones that I’ve seen cruising past my living room window in the last few months, but I can’t complain about not having to have a dolly and tracks to get the camera movement I’d like.

If you like this video, you should check out some of the others on Oliver’s vimeo page.  The video in Vietnam is equally beautiful.

What do you do with all the odd bits of plastic floating around the ocean?  Well, it seems that these sailors have found one use:

I’m in love with the editing of the this film – more the the point, the mesmerizing water shots.  It makes me miss the open water and living on a boat while reminding me of how little there is to do when you’re not actively  sailing, sleeping or doing chores.  There isn’t much to do during the few hours of down time.

Kimchi (Hangul: 김치; Korean pronunciation: [kimtɕʰi]; English pronunciation: /ˈkɪmtʃi/), also spelled kimchee or gimchi, is a traditional fermentedKorean side dish made of vegetables with a variety of seasonings. It is often described as spicy and sour. In traditional preparation, kimchi is often allowed to ferment underground in jars for months. There are hundreds of varieties of kimchi made from napa cabbage, radish, scallion, or cucumber as a main ingredient.

I had never had kimchi until I got to high school where a very large percentage of the student body was made up of Koreans.  To help make these international students feel more at home, every meal served up at school had the option of rice from the cafeteria line and kimchi from the salad bar.  This is where I first tried the delicious pickled “condiment”:

I’m a big fan of any kind of Asian food (although I tend to favor Japanese) and kimchi is somewhat of a staple in my kitchen.  Now after watching this film, I’m very curious to know if I have Chinese or Korean kimchi sitting in my fridge at home.  I’m pretty sure it’s Korean, but now I’m not sure…

I love the journalistic style of this film, it is after all, how I started out working in film.  All the various piles of ingredients add such a beautiful array of color and watching the women work just makes me want to run home and enjoy a bowl of rice and kimchi.  Perhaps that will be my dinner tonight…

There are several difficulties with keeping up with a blog:

I know, point number three seems completely ridiculous as the reason for all of this is to share my portfolio and to share what inspires me but somehow sharing other people’s work seems to so much safer.  I’ve always been someone that prefers to work behind the scenes, never wanting to draw attention to myself.  I rather like being a kind of ghost in the creative process – have some exciting role, but then when it’s time for recognition I get cold feet.

I’m trying to be better at putting my work out there – otherwise it’s rather useless actually producing it in the first place, right?

So this is what I’ve been up to:

What do you think?  Comments? Anything that you think could be better?  I’m all ears.

Enough about me today and back to my usual posts later this week.  Happy Tuesday!

Something very strange is happening here in the Pacific Northwest.  We’re actually having summer weather and have been for several weeks now.  So much so that several people I’ve talked to are already prepared for Fall weather and the land is definitely ready for some rain – these wild fires are just plain scary. I don’t think that will be happening any time soon so for now I’m trying to enjoy it as much as I can.

As anything in water sounds fabulous right now:

I love all of the moving arial shots in this video – it almost makes me feel cooler even if I am sitting in 90 ºF weather.

With Summer officially here – and having been here for a while, it seems that grilling every food in site seems to be the thing to do.  For one thing, it keeps the heat out of the kitchen and it means more time outside and soaking up every last summer ray possible.

To get us all into the mood for this weekend, the Grilling Everything Burger:

Growing up, I was warned that time would speed up as I got older.  Now that I’ve been out of school for a while and making my way in the world this warning is all too true.  I wish it weren’t the case.  For instance, it’s already the end of June and I have no set plans for the July 4th holiday – mostly because I thought I still had plenty of time to figure out my weekend.  I can’t quite figure out how it snuck up on me so stealthily.

Thinking about this the other day made me think back to my days when I was able to travel frequently for pleasure and the days seemed to stretch on forever.  You might say that the long days had something to do with me sitting on a bus for 19 hours to get to my next destination but I don’t think that was the only thing.

Then I came across this little beauty:

Could Jed’s theory be exactly the reason for the time warp that I’m sure I’m stuck in?!

I can hardly believe that Sonja Silver’s raincoat Kickstarter is complete!  If you remember, I made the campaign video and we’ve been fundraising ever since the completion.  This has been the least stressful campaign that I’ve ever worked on – woo hoo for people with an online following and a great campaign team!

In case you were hoping to order a coat or any other items but didn’t get your order in in time, you can still get your name in before they run out.  There are 94 coats still available and Sonja is willing to take fill orders over the phone.  Please contact me if you’re interested.

And in case you haven’t heard about this fabulous coat that I’ve been involved with, check out the video below:

Thank you for everyone’s support and for all of those who have contributed!

It’s been a while since I posted something that inspires me.  I’ve been swept up in a whirlwind of film screenings and getting other projects underway, and thus, had little time to share some of my findings.

So during a break the other day,  I came across this little beauty:

Now it may not be the most uplifting of topics but it’s informative, visually interesting and even better, the visuals enhance the message.  Sharing such devastating statistics and making it interesting would have had me puzzling over how I would even begin to tackle this project for all of eternity.  Well probably not, but because I’m tired as it’s the end of the week, it would seem like all of eternity if I attempted it right now.  It certainly wouldn’t turn out as cool.

I have always had an appreciation for good motion graphics but have become even more enamored by the really good stuff since having to do my own for my last project, A Raincoat by Sonja Silver.  I doubt that I’ll be moving towards using motion graphics exclusively in documentary projects in the near future, but I’d sure love to include something like this.